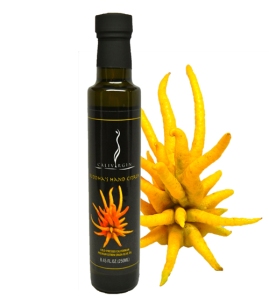 citron, fragrance citron, or simply that weird lemon squid looking thing sold in some markets; is often gawked at but relatively unknown and somewhat mysterious.

For centuries the Buddha’s hand citron has been treasured by Japanese and Chinese cultures symbolizing prosperity, longevity and happiness.  Often popular at New Year’s , it is supposed to bring a household good fortune.  It is often used instead of flowers as a centerpiece that perfumes a room for weeks with its delightful citrus smell and a fruit with the fingers in the closed position has been said to resemble praying hands.

I have seen them as high as $7-$14 each in some specialty stores which is quite a premium for a produce that has traditionally been a culinary misfit.  This strange fruit is relatively fleshless with a thick rind almost to the core.  Because of its properties it doesn’t produce much juice at all which left it as a source of zest for cooking.  I have also seen it shaved over fish for baking and grilled then laid over salad but both with a relatively mediocre result in taste in my opinion.  It can be candied and added to baked goods but probably the best use I have found was for infusing Vodka.  UNTIL NOW!  After hearing it symbolizes bringing good fortune, longevity and happiness who wouldn’t want to bathe with the Buddha’s Hand!  Now that is actually possible, plus I feel that what we have done at Coldani Olive Ranch is offer an abundance of cooking possibilities for the Buddha’s hand citron by making an agrumato style flavored olive oil out of it.  Introducing Calivirgin Buddha’s Hand Citron olive oil.  We use California grown Buddha’s Hand

Citrons from a valley grower and created an assembly line of family members to hand cut each fruit into smaller pieces so that they would fit into the olive mill.  The Buddha’s Hand is then processed with our estate arbequina olives and the result is a unique tasting citrus flavored olive oil.  I may be going out on a limb but I have searched the world and I believe we are the first and only ones who make a flavored olive oil out of this fingered fruit.

I am often asked what it tastes like but I am still working on a good answer.  It doesn’t taste like lemon or our Lusty Lemon olive oil.  The Buddha’s Hand olive oil has a true citrus flavor.  Tasted straight by itself, your first taste is somewhat pungent followed

by the floral bouquet of citrus.  I find that it is better accompanied with foods than by itself, the citrus flavor really makes salads pop with brightness adding a nice compliment to bitter lettuce greens.  In the short time we have had it available people have told me they enjoy the flavored oil on fish or as a flavored substitute for butter in cakes and even an accent to marinade wakame seaweed salad.  I recently mixed some with garlic and a dash of paprika and coated some artichoke halves before grilling them on a BBQ and they turned out fabulous.

As far as bathing in prosperity, longevity and happiness . . . olive oil makes a great skin moisturizer and our Calivirgin Buddha’s Hand olive oil has a nice citrus smell so lather up and perhaps this magical fruit will change your life!  That might be a stretch but I know a lot of chefs and foodies will appreciate what we have done and have fun pairing it with food in the kitchen.

4 thoughts on “Buddha’s Hand Citron And An Olive Oil That Brings Prosperity?”